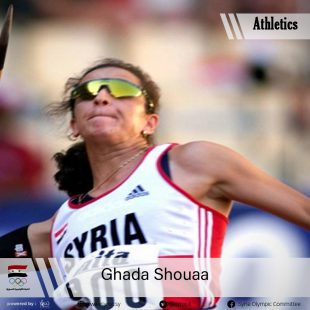 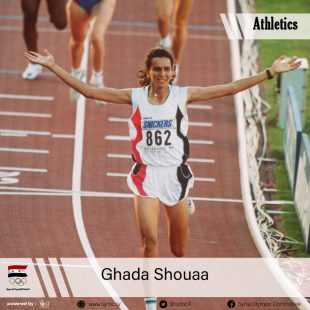 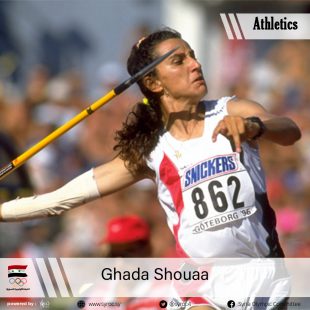 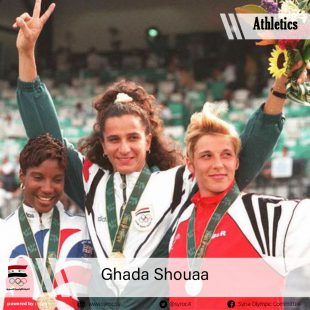 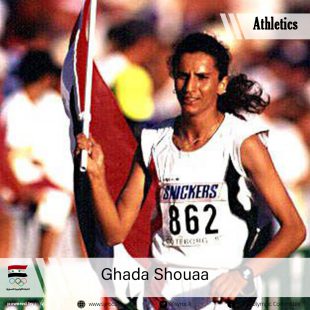 The Golden Champion Ghada Shuaa
Ghada is one of the brightest Syrian athletes of all time. She is the greatest and most valuable achievement in the history of the Syrian Olympic sport by winning the gold medal at the Atlanta Olympic Games in 1996. She has been able to prove that Syrian women have been, and still are, pioneers in different fields. Global achievements.
• The first step in the Syrian championship in 1991, where it recorded a new Syrian number of 4493 points.
• In her first international experience, she took the lead in the World Athletics Championships in Tokyo in 1991, recording 5066 points. In the same year she improved her number in the Asian Championship in Malaysia and finished second in the world with 5425 points.
• Ghada followed her rise in the seventh Arab Games in 1992 in Damascus and ranked first in the record 5528 points, and also won Syria in the same cycle long jumps and javelin and high jump and the relay race 4 times 100 m.
• The 12th Mediterranean Games in Cape Dagd, France, in 1993, began its international entry when it gave up the step by step, jumping 890 points to 6168 points and winning the silver medal.
• Ghada was named World Record in the Goodwill Course in St. Petersburg, Russia in 1994 with a 6361-point bronze medal.
• In 1994, the Asian Games 2014 gold medal in Hiroshima, Japan, recorded 6260 points.
Ghada is the world champion in athletics
• The Austrian Gotsic International Championship in 1995 as a prelude to winning the world championship took first place after it removed the world champions and recorded 6760 points, the best world record in that year in the international competition seven.
• The attention was drawn to the Syrian hero Ghada Shuaa at the World Athletics Championships in the Swedish city of Gothenburg in 1995, where she won the world title for her and Syria registered 6651 points after conquering the world’s most prominent American giants Jackie Guinner Kirsi and the German Sabine Bruan and Haikha Dreisler and achieved a great victory for Syrian sport and culminated World Athletics Champion.
• A personal figure of 6942 points was recorded at the Austrian Gutsch on May 26, 1996, the best international record recorded five years ago.
He went in gold
• Ghada Shuaa won the gold medal at the 1996 Summer Olympic Games in Atlanta to win the Olympic gold medal for the first time in the history of the Olympic Games after recording 6,780 points, a big difference from Belarusian Natasha Sazanovic (6563 points) and British Denise Lewis (6489 points).
• The gold medal of Ghada was the second Olympic medal for Syria after silver medalist Syrian hero Joseph Attia at the 1984 Summer Olympics in Los Angeles, where he achieved the second world championship wrestling.
• Ghada suffered a severe back injury during her regular training in Damascus, and was sent to Germany on a long treatment trip away from the fields of athletics for a long period of more than two years.
The long journey was successful, and Ghada recovered and was gradually re-trained by her new coach, Axel Charper, about six months before the start of the 9th Arab Games in Jordan in which she won the two golds of javelin and high jump, iron ball and long jump, The seventh competition for weak competition in this tournament on the one hand, and the desire to collect the largest number of medals for her country.
Ghada’s participation in the Arab tournament was a “final rehearsal” before the 1999 World Athletics Championships in Seville, and despite her long distance from international competitions she won the bronze medal with 6,500 points behind Frenchwoman Onis Barber (6861 points) (6724 points).